Lessons From The Mock Elections - Taguig

At the mock elections in Taguig today, voters had to wait an hour until they were able to feed their ballots once again into the counting machine. One voter who was a member of the board of election inspectors (BEI) in the last elections said that the message "Results Have Not Been Read" kept appearing on the machine screen every time a ballot was fed. The ballot does not drop into the ballot box and the machine ejects it.  Word circulated that there was an "ambiguous marking" on the ballot. No one gave any explanation as to how the problem was remedied but after an hour the machine started to accept ballots again.

Holding several mock elections is good because it draws significant media attention and as a result enhances public awareness on the new system. More than that, it is supposed to give the Commission on Elections (Comelec) and contractor Smartmatic a chance to preview the scenarios and learn of the system and procedural strengths and weaknesses in a close-to-election day setting. It also allows the Comelec to monitor Smartmatic's systems and procedures and its response turnaround time should any of the machines exhibit problems like in the case of Taguig.
But today's mock elections was more of a show than a learning exercise. If it were a learning exercise, there would have been informed or expert observers whose tasks would be to document the process, capture data and input these into an information database to improve actual election day processes. Polling officials, voters, and even spectators would have been systematically interviewed for their observations and inputs on the process and how it could be bettered. 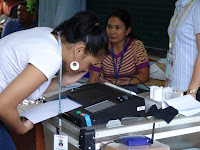 Smartmatic had two technical support personnel at the Taguig mock polls in Marharlika elementary school. During the period when the machine had stopped accepting ballots, one of them was constantly on the phone reporting what had happened and getting instructions on how to solve the problem. However, at one point when the waiting seemed too long, one of the Comelec officials insisted that the intended spare precinct count optical scanner (PCOS) machine be used saying, "kawawa naman ang mga botante" because the voters had waited long enough.
After an hour's wait and to the delight of the voters, the machine finally accepted their ballots. But of the 50, three were rejected.
The eight copies of the election returns were then printed out and voters and watchers carefully examined the printed results. Then the results were electronically transmitted through the mobile phone provider, to the Comelec central server in Intramuros, the board of canvassers in Taguig, and to the common server for the political parties and the citizens' arm in Pius XII compound in Paco in Manila. 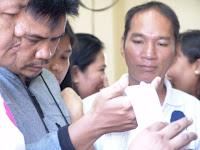 Sharing the learning
It would certainly be good for the Comelec to be upfront about the challenges and issues that they faced during the mock elections, especially the ones encountered in Taguig and in other places. An explanation on what had caused the problem, and what is an "ambiguous marking" and how it should be prevented or avoided are important information for the public.

Comelec should also inform the public of the instances that ballots were rejected.  A rate of 6 percent is very high. This or even smaller numbers could mean winning or losing as seen in previous elections both at the local and national levels.
They should also assess the quality of the response of Smartmatic and the time it took to resolve the issues. Comelec should also require the contractor to commit to a maximum response time and report issues and their responses in real-time and in an orderly fashion. If Comelec plans to put up control center, it would have to track and receive, among others, these and all information related to the deployment of the resources of Smartmatic in ensuring that the machines will work as specified.
Unless it is a deliberate attempt to sabotage the elections, it is not acceptable to blame voters for a machine malfunction because they had marked the ballot wrongly. In fact a wrong marking should never cause a glitch.  A member of the Comelec team interviewed after the mock polls drifted the blame to the voters and insisting that they should learn the proper way of marking their vote. 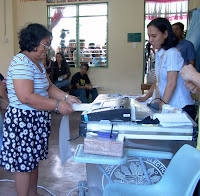 A voter who marks his/her ballot wrongly will be penalized because the votes will not be counted.   That's the severe price to pay because other systems allow voters to correct any voting mistakes.  There is no such provision in the system that Comelec had opted for.  Unfortunately, the poor voter will pay dearly for not educating her/himself on the new process of voting.
If the machine bogs down because of an "ambiguous mark," the systems designers and programmers will have to answer for it.
Public simulation needed
In a 1,000-voter precinct (one PCOS machines for 1,000 voters), the issue that appears to be of import is voter flow management. But more fundamentally, the size and layout of the voting center, which are the public school classrooms in most cases, pose as a  more challenging constraint. A procedure that brings voters to go back-and-forth to the BEI chairperson would necessarily create a bottleneck.
Process flow management experts, looking at the different cycle times within the voting process, will be able to compute how many voters under process would create a queue.  These are significant inputs to consider because increasing the voting hours is not necessarily the right response to ensure that 1,000 voters are able to vote within the prescribed period.  By carefully examining the internal processes, the comings and goings of voters in a polling station could be managed well.  And even when a queue appears, it would be more to bring order rather than a manifestation of an ill-designed system. 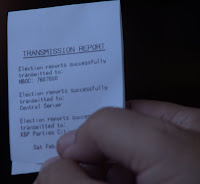 Last year the Comelec junior staff along with a process-flow expert conducted extensive experiments. Their study apparently had yielded valuable data that could inform polling station preparation, voter flow management and voting process design.  Many school principals and BEI members assigned in multi-storey voting centers in the urban areas where voters are in their thousands could very well benefit from that study.
Voter flow management was never apparent in a 200-voter precinct. Now it seems that this needs to be seriously looked into.
Posted by In Gratitude on Saturday, February 06, 2010